A voice of gold, between the Atlantic and the Mediterranean. An intimate yet powerful moment.

Singer-songwriter, performer and pianist, Dominica Merola was born in Montréal of Italian parents. She charms her audiences in Canada, the United States and Europe with her charisma, commanding stage presence and piano virtuosity in various styles that each combine quality lyrics with talented composition. 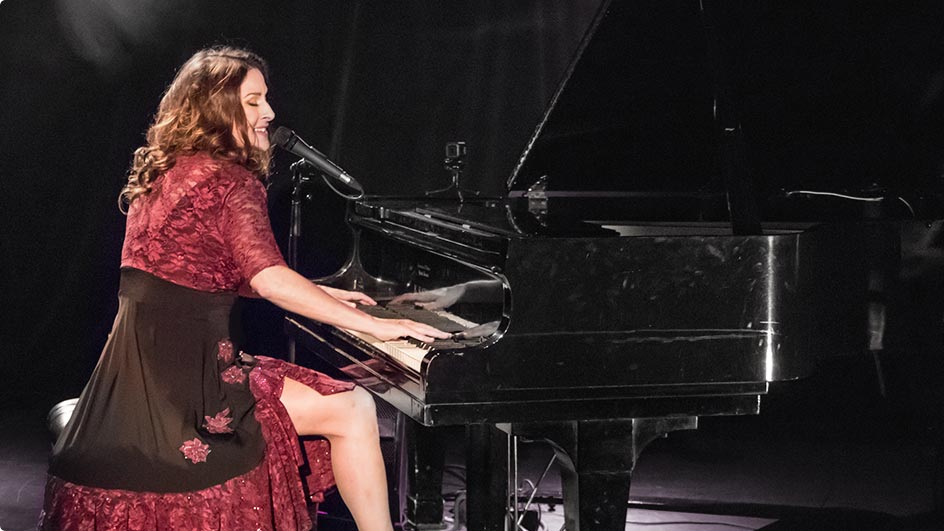 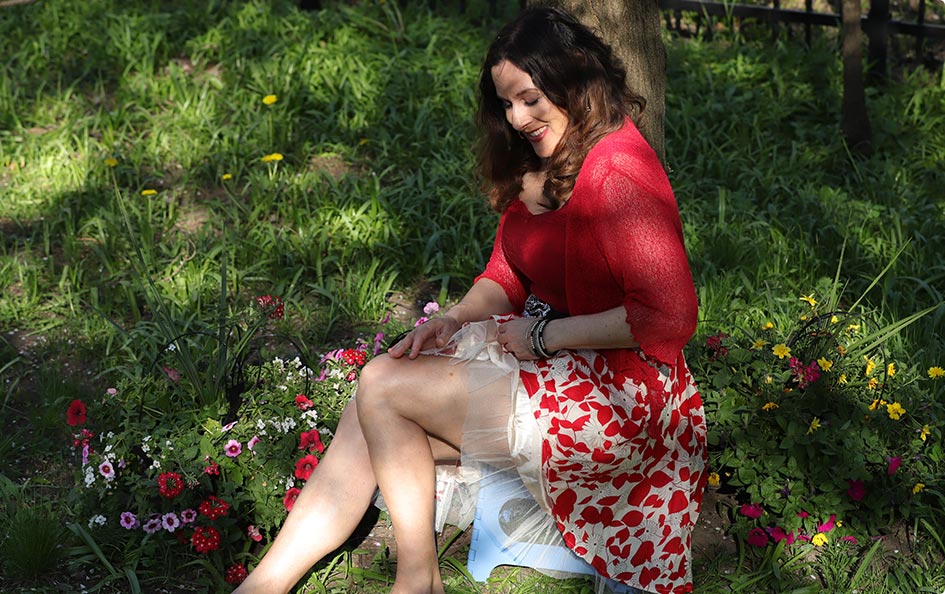 2022 a year of several challenges for Dominca

Now the pandemy is receding, the outlook is much brighter. Dominica has namely  received several invitations for a tour    in France during this spring. She is also very busy creating new songs for a projected new album .

During her tours in Europe, Dominica Merola prefers the intimate atmosphere created by piano and solo voice, which showcases her unique vocal tonality and virtuosity of her artistry at the piano. Invited in 2015 to France, Belgium and Portugal, she also enjoys being accompanied by a choir.

“This singer has a pure, intense, sensual voice, with breathtaking range, which make her an original performer. A modern bohemian who travels through music and feelings.” (in translation)
Radio-Canada
“She has a beautiful voice and knows how to perform her songs. She has impeccable support from her musicians.” (in translation)
Jean BeauchesneJournal de Québec et Journal de Montréal
“The album Appassionata procures pleasure and a sense of being somewhere else. The singer, who has a true, warm voice, revisits, Italian style, Le Petit Bonheur and Les Croissants de Soleil. The result is more than pleasing, Dominica Merola does it brilliantly.”
Michel AllaireSorstu.ca
“A sensitive performer, who blends tradition with modernity.”
Corriere Italiano.
“What talent! A truly wonderful evening.” (in translation)
Radio RTBF Namur.
“A sensitive authenticity” (in translation)
Planète francophone.
“She has a magnificent voice, a super tonality!” (in translation)
Radio Fréquence Paris plurielle.
“A voice of gold, between the Atlantic and the Mediterranean. An intimate yet powerful moment.” (in translation)
CulturActu.com.
“An exceptional concert. The audience was seduced by the fascinating voice and charisma of the singer Dominica Merola… thundering applause and an umpteenth standing ovation to cheer for the artist… a splendid evening that will not soon be forgotten.” (in translation)
Nadine ClavierSaint-Florent-Sur-Cher, Le Berry Républicain
Previous
Next

2019, Here and there – between Paris, Nîmes, Genappe and Christmas in Montréal.

The year 2019 was a busy one for Dominica Merola, between her shows in Canada and Quebec, as well as Paris, in the spring at the Théâtre des Déchargeurs for 13 concerts, then in Nîmes for an annual gala concert with the Association Gard-Québec.

Once again in France during November/December at the Théâtre des Deux Ânes her exceptional performances in the mythic Parisian venue were recommended on France 2 by Michel Drucker during his show Vivement Dimanche, as well as by others. Dominica then headed to Belgium, where she performed both solo and accompanied by the Saint-Géry du Vieux Genappe choir.

These concerts were the opportunity for her to sneak preview her fourth album, En attendant minuit, a Christmas album coproduced with Paul Bisson on which she is accompanied by piano and backed up by two choirs, one from France (Vicus Aureus) and the other from Quebec (La Muse). With traditional French Christmas songs such as En attendant minuit, it is also an album of childhood memories with an original song co-written with her sister Caroline, with music composed by Dominica, and produced by Sébastien Dufour.

2018, from Portugal to Belgium, to France and Québec!

This was a year marked by many concerts in Québec, among others, at the Théâtre Outremont in February with the premier of an original show called Tango mio d’amour with a winning trio formula: piano, accordion, contrabass, for Quebec and Canadian broadcasters. The show’s lineup included several original songs from her new album Bohémienne de cœur and a few classics from the world of tango (Piazzola and Gardel) in an energetic yet understated production by Élaine Salvail, choreographer and dancer.

The year ended with a concert tour in Portugal and Belgium as guest Quebec performer at the commemoration of the 100th anniversary of the WW1 Armistice War (1914-1918).

Thereafter, she returned to France with a series of very successful Christmas concerts called Un Noël au Québec in churches in Berry, where she was accompanied by a choir from the Bourges region. Dominica received the medal of honour from the Mayor of  Saint-Florent Sur-Cher, for her shows in France honouring her sensual voice and virtuosity at the piano.

For the new year, a new album and new show with an original tempo: Bohémienne de cœur. At the piano and surrounded by her musicians, Dominica takes us on an emotional journey, that makes us want to move to the Latin rhythms. She plays with her voice, alternating between velvet sensuality and passionate strength.

Dominica has composed all the music for her songs, but collaborates with important French-language songwriters including Marc Chabot, Nelson Minville, Sandrine Roy, Gaële and Mala Barbulescu. Produced and arranged by Sylvain Michel, the album offers a musical voyage at the crossroads of modern, classic and Latin sounds. Distributed by Éditions À l’infini communications, the record is available on all digital platforms.

STILL PASSIONATE AFTER A 20-YEAR CAREER!

Dominica launched her career in the early 2000s. Among the concerts she performed was her first solo show Une voix, un voyage at the studio-theatre at the Place des Arts in Montréal, followed by a tour of the Maisons de la Culture, both in  Montréal around the province.

Due to the resounding success of her first tour, she was able to create De Campobasso à toi, a second solo show staged by Robert Marien in which Dominica reconnected with her Italian roots.

“Dominica Merola, has a very warm voice, a velvet voice that has a delicate timeless quality. The record is a beautiful musical object… Dominica, is someone worth discovering.” (in translation)

Her second album Appassionata, in 2010 was produced by Luc Boivin, (Audience de Fidelio Musique, distribution Naxos). It includes songs Dominica selected from the popular, modern Italian repertoire, and personal compositions in both French and Italian.

It also includes a performance of Naufragés, a beautiful love song in a duo with Daniel Lavoie, one of the heroes of the French-language musical Notre-Dame de Paris. In love with Quebec’s popular music classics, some of these titles translated into Italian, are also on the album. Her writing partners included Sandrine Roy, Vincenzo Thoma and Viano.

Dominica Merola was born into a family of artists; her father is a painter-sculptor, her mother an actor. Dominica chose music and began taking piano lessons when she was five. Voice and piano studies at the Vincent-d’Indy music school in Montreal, as well as acting courses have given her the tools to truly perform her concerts.

Besides her tours and recordings, Dominica regularly participates in shows for charity as well as for radio and television. She also wrote the music for the song Laisse-moi y croire performed on the album Un enfant, une vie with words by Isabelle Lavoie. She also created and performed the theme song Laisse-toi bercer for the Relais pour la vie in Chambly, organised by the Quebec branch of the Canadian Cancer Society.